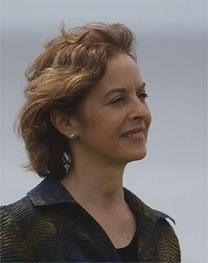 Elizabeth Hack lays down color and texture onto surfaces with a transfixed awareness that captures every detail of the hand, pen and palette knife. These “excavations” leave no stroke, line, or color unturned. The strong horizontal compositions of her “Wave Series” and corresponding series, “Wave: The Other Side” simultaneously evoke motion and stillness.

Hack states, “The ocean from a distance looks vast and still and yet up close reveals its waves moving and crashing.”  Born in Frankfurt, Germany in a military hospital, Hack’s family moved twenty times throughout the US and Europe. The constant necessity of movement balanced with a need for stability has developed into a rich visual vocabulary for Hack’s work. Each “sculpted“ painting shows a new aspect of the artist’s meditative stance.

Finally settling in California, Hack became a regular visitor of the northern coastal town Sea Ranch. The Wave Series was begun there and continues to develop with “Wave: Other Side” and “Wave Forms”. The Series can be interpreted as a play between ocean, landscape and pure abstraction.